At the beginning of February we said hello to Lee, our new research assistant.

At the end of February we said goodbye (for now) to Senyo.

The Pawlowic Lab has been hosting a WCAIR Trainee, Mr. Senyo Botchie, since July 2019. While in Dundee, Senyo has been learning the basics of Cryptosporidium culture, detection, and drug discovery.

He was recently featured on the university blog: https://blog.dundee.ac.uk/one-dundee/dundee-experience-to-help-ghanaian-scientist-tackle-parasite/ 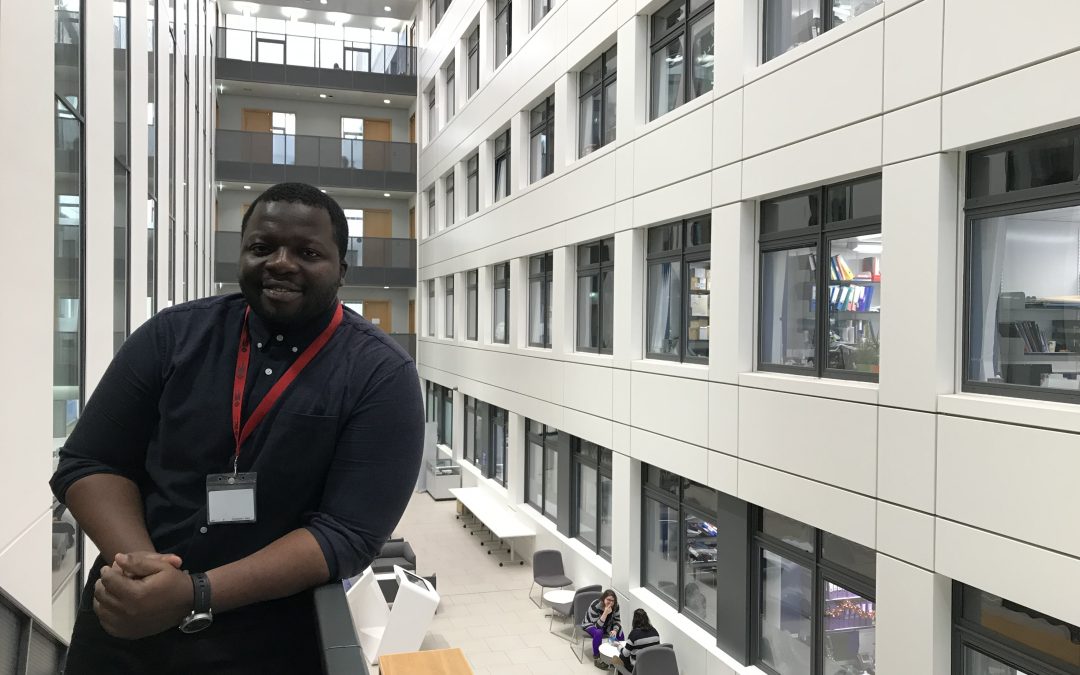 We are proud of what Senyo has accomplished while in Scotland and look forward to continuing to collaborate with him and his supervisor, Dr. Irene Ayi, and her group at the Noguchi Memorial Medical Research Institute at the University of Ghana.

Thanks to WCAIR for sponsoring Senyo’s training and the University of Dundee Global Challenges Research Fund for supporting our growing collaborative research.

UPDATE as of March 1st

We sent 46 boxes of supplies and equipment to Ghana so that Senyo and his lab will have everything they need to carry out our research collaboration. Thanks to Mike and his Stores team for all the help arranging the shipment! Also thanks to Suze Farrell, the other WCAIR trainees, and FedEx for sending this hero-sized shipment!

Congrats to Beatrice on the success of her project application to the Wellcome Centre for Anti-Infectives Research. Ross provided supporting data, ideas, and writing. Beatrice was awarded £10,000 for her project. She had to win over all of WCAIR with a 5 minute “pitch”, then write a 2 page application, and present to the WCAIR management board. It was worth it though, and we’re all excited to see her develop the project over the next year!

Congrats to Emma for being selected for a travel grant from hellobio!

Emma was also awarded a conference travel grant from the Disease Models & Mechanisms and The Company of Biologists Limited.

This will support her travel to attend the Keystone Meeting “Tissue Organoids as Models of Host Physiology and Pathophysiology of Disease” in Vancouver in January 2020.

You can read more about it here: https://t.co/cY9mhFsUux?amp=1

Thanksgiving is a tradition for the Pawlowic lab, and this year we took things to a new level! Thanks to everyone for cooking and making it another great lab event.

Seal sighting by Matt during an early morning run down by the V and A Museum quickly became the highlight of the week!

Thanks to Sharon, we’re working on our green thumbs in the lab allotment behind the building. We planted a bit late this year, but are greatly looking forward to the spring.

Ali Floyd, our WCAIR Public Engagement Manager showed off his singing chops as the closing act at Dundee’s Pride Festival this year. He also helped organise another great “Street Foods” event (Mattie and Fabio take a “cellfie” with a skeleton) in between giving tours of the DDU).

Professor Annette MacLeod gave an inspiring keynote lecture at this years BCDD retreat. We learned that trypanosomes are found in the skin, the skin is a “reservoir” for transmission, and that the diversity of human genomes of African populations is understudied and under-represented. Looking forward to seeing her work featured at the exhibit at the National Museum of Scotland, free and opening in December.

Mattie attended a Fellows day at The Royal Society and got a huge surprise when she was seated for dinner with the current president, Venki Ramakrishnan!

UK Parasitology is a small world- at the Royal Society I got to spend the day with Clare Harding, a new Toxo scientist in Glasgow, and her 3 month old baby. And it was a great surprise to hear Steven Spoel, a plant biologist from Edinburgh, speak about his experience as a URF. Mattie met his wife just a few months prior when she gave a seminar to the parasitology group at the University of Edinburgh!

We have added a few lab members this autumn:

Senyo Botchie joins us from Dr. Irene Ayi’s group at the Noguchi Memorial Institute for Medical Research in Accra, Ghana. Senyo is a WCAIR trainee visiting to learn the basics of Cryptosporidium detection, in vitro culture, microscopy, and drug discovery.

Stephen Andrews is an undergraduate student at the University of Dundee who has joined us as an Honours Student. He has become prolific at midipreps, PCR, and DNA cloning. We’re happy to have you!

Nina Svensen, a postdoc in the Drug Discovery Unit, has joined us to set up in vitro drug discovery assays.